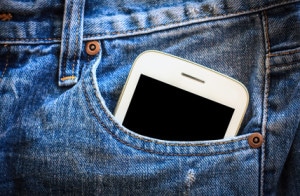 Danger for fertility: Mobile in the pocket. Foto: Fotolia.de

A recent study by the University of Haifa has confirmed what has been suspected for a long time by physicians: electromagnetic radiation from mobile phones can damage male fertility.
For the first time, diagnosis:Funk, in “Smartphones & Tablets damage testes, sperm and embryos” documents for the public: 130 studies and 13 “reviews” demonstrating that the pulsed microwave radiation endangers the male sperm and the healthy development of the embryo. In almost no area are the results of mobile radiation research as extensive and unambiguous as to the damage of the reproductive organs.

Now a new study from Israel confirms these findings. Martha Dirnfeld, a professor at the Medical Center of the Technical University of Haifa, summarised the results of the study according to a report on br.de (Bayrischer Rundfunk) as follows: “We have found three usage habits of the mobile phone that lead to a considerable drop in sperm count. For men who use the phone close to the body or carry it near the testes, the number of their sperm was significantly lower.” The scientist warns not to make phone calls for more than an hour a day. It is also harmful to use the mobile phone when it is charged. Through these habits, according to the study of the Israeli scientists, the sperm concentration can decrease or at least the probability of it happening is much higher.

Less than 20 inches from the crotch

The physical proximity of the mobile phone proved to be particularly dangerous. The study apparently has seen a sinking sperm concentration as soon as the mobile is worn less than 20 inches away from the crotch. In 47 per cent of the men with this habit, an “abnormal concentration” of the sperm was determined. For the study, the habits of mobile phone use of 106 men were investigated

Another fact is that sperm quality decreases continually in Western societies. In 40 percent of the couples suffering from infertility, the quality of the male sperm is the cause. So the study of the Israeli scientists permits only one conclusion: The time of uncertainty and guessing is a thing of the past. The relationship has been proven. Professor Sigal Sedetzky, a cancer and radiation researcher at the Tel Hashomer hospital near Tel Aviv, recommends the inescapable consequence: “It is clear that we must take precautionary measures when it comes to mobile phones. You should keep the phone away from the body and try to minimise the exposure to radiation.”

Using a “headset” is not the solution

As Swedish scientists have recently discovered, it is unhealthy to keep your mobile phone near your head during a phone call. But to leave the mobile in your pocket and use a “headset” instead, is also not a good idea, according to a report on ewg.org. According to a study conducted by the Center for Reproductive Medicine at the Cleveland Clinic, a mobile phone lowers the male’s fertility during the telephone call when the phone is in the pocket or fastened to the belt. For the study, the scientists collected samples from 32 men. However, the strength of a mobile phone also depends on the proximity of the device to the next base station, as Sarah Driessen from the research center for electro-magnetic environmental compatibility of the university clinic Aachen explained in an interview on spiegel.de. “When the next base station is close, the electromagnetic radiation that is emitted is low. In poor reception, on the other hand, the mobile phone has to provide more power in order to establish and maintain a connection, which means that the operator of the phone is exposed to much more radiation.”

“Swiss Harmony” products for the harmonisation of homes ensure that its electricity contains a different information. Via the law of resonance, it transmits the information of the visible light spectrum onto the electricity that flows past it. This electricity will then distribute this harmonious information into every last crevice of the building. Any plugged in WiFi or cordless phones you have in your home will become a beacon of harmony.

The Law of Resonance states that in a resonance field any frequencies that do not conform to the field cannot form a resonance and so cannot exist in it. In other words, in a harmonic resonance field any artificial frequencies cannot have an effect. It does not matter from where they originate. The mobile products by Swiss Harmony (BioRing, BodyCard, BioBracelet, and the BioPatch) harmonise the human body by transmitting the harmonic resonance field information on the the energy system in the body. This way the body stays free from the negative effects of artificial frequencies.