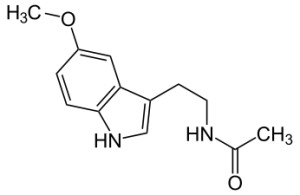 C13H16N2O2
The chemical structure of Melatonin

Melatonin, one of our bodies’ hormones, controls our sleep/wake cycle and, by extension, the degree of relaxation and quality of sleep we achieve. Melatonin is produced by various tissues in the body, although the major source is the pineal gland, a small endocrine gland located in the center of the brain but outside the blood-brain barrier. This gland, however, needs darkness to produce melatonin effectively. Bright light inhibits the pineal gland’s production of this hormone. This may also account for why some people sleep poorly when the moon is full.

As we age, our bodies produce increasingly less melatonin, which explains why many older people sleep less and not as deeply. When we have insufficient melatonin, we cannot relax enough for our bodies to complete all of the processes of renewal and regeneration that they normally would during sleep. Without these processes, we become prone to illness including insomnia, colds, inflammations, allergies, immune deficiencies, and cancer.

Melatonin from the pharmacy

Melatonin can be prescribed as a drug for severe insomnia or sleeplessness. In the United States it is also used to counteract jet lag.

Melatonin has many additional properties. As an antioxidant, it destroys free radicals and, in turn, slows aging. Free radicals are aggressive oxygen compounds that damage cells by oxidation—like rust on iron. People say that when we age we get “rusty.” This accurately describes how age-related melatonin decline affects us.

Numerous studies show that melatonin can shield mammalian tissue from ionizing radiation by up to 30%. The National Health Research Institute has collated and reviewed these studies on their website (http://www.naturalhealthresearch.org/nhri/?p=4906). In 1996, Russel J. Reiter, a professor in the Department of Cellular and Structural Biology at the University of Texas (San Antonio), co-authored Melatonin (Bantam) with Jo Robinson. Reiter is a world-renowned expert on melatonin and has been studying its functions and its role in sleep, illness, and the reproductive system since the 1960s. He maintains that it is five hundred times more effective than Dimethyl Sulfoxide (DMSO) in protecting against radioactive radiation. It is also provides better protection than a lead apron against X-rays. A more in-depth discussion of melatonin and its role in sleep and overall health is available on our electrosmog pages.

Next: Part 3: Causes of Sleep Disorders