Part 2: What illnesses can water veins cause?

Part 3: How do I find water veins?

In 1929 Gustav Freiherr (Baron) von Pohl investigated geopathic stress and water veins in Vilsbiburg, a small town in Lower Bavaria with a population of 3,300. His goal was to determine in which beds people had died of cancer. During his investigation, he was not allowed to speak to any of his subjects and was accompanied by a control group continuously. Legal testimony confirms that he didn’t know in advance whether or how many people died of cancer in Vilsbiburg. Yet, he succeeded in identifying the beds of all the 54 people who had died of cancer (32 male, 22 female). Von Pohl published his findings in 1932 in a book titled Erdstrahlen als Krankheitserreger – Forschungen auf Neuland (Earth Currents–Causative Factors of Cancer and Other Diseases). It was republished in 1978 and is still commercially available.

The original protocol of the commission in German is available via this link:

Original protocol of the Vilsbiburg commission

In 1937 Dr. H. Beitzke, a professor at the Institute of Pathological Anatomy at the University of Graz, studied the effect of water veins on cancer in mice. Beitzke placed half the mice over a water vein and the other half in a room free from the influence of water veins. Over a period of thirteen months, thirteen of the mice suffered from cancerous tumours of varying size. Twelve of the thirteen mice suffering from cancer lived over the water vein while only one lived in the uncontaminated room. This study is not available for purchase in hard copy. However, thanks to “Geopathology Switzerland” (www.geopathologie.ch), extracts from the 1937 publication of Beitzke’s results in the Vienna Clinical Weekly. are available via this link: https://www.geopathologie.ch/files/info_broschuere_2010.pdf

Additional studies demonstrate the harmful effects of earth radiation in general. These include studies by Dr. Otto Bergsmann at the University of Vienna (1989), Kessler and Kopschina (1992), and Kopschina and Daun (1994). They are discussed at greater length on the  Earth Rays pages.

Why are water veins harmful? 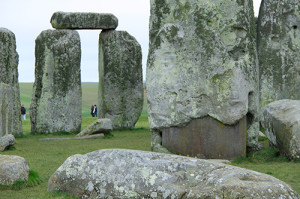 Stonehenge, England:
Many believe that the energising effects of many locations can be attributed to intersections of strong water veins.

Researchers believe that water veins are not always harmful. On the contrary, they can be revitalising when exposure to their energy field is limited to short periods of time. They become harmful when exposure is excessive (Hacker et al., 2005). As with medicine, dosage is important. Imagine, for example, spending time in the sun. You might love to get a good tan and enjoy sunbathing. But, if you doze off, you might well end up with a bad sunburn. Sunlight is essential to our health—it allows our bodies to synthesise vitamin D, which in turn allows us to absorb calcium. It also boosts our general sense of well-being. But too much sunlight can lead to serious problems—not only sunburn, but skin cancer. The same principle applies to water veins.